You are here: Home / Group Riding

The Group Runs are primarily social events, not intended to be training sessions although learning never stops and we can all pick up extra tips from each other. But certain key rules apply and should be followed in order to ensure a safe ride, and that everyone enjoys the ride.

Every group ride will have a nominated ride leader and ride tail. The ride leader is responsible for setting the route and for ensuring that any new riders who turn up are made welcome. New riders should identify themselves on arrival. New riders and associates may be buddied up with an Observer or if an Observer is not available an experienced full member of the group. The new rider will follow the experienced rider on the ride unless the experienced rider suggests otherwise.

Depending on the size and mix of ability of the group on the day, the ride leader and tail may split the riders up into different groups. The ride leader is responsible for ensuring that a pre ride brief is given prior to setting off. Once on the ride the following rules MUST be observed. Failure to follow these rules may result in you being excluded from future runs:

Where possible, i.e. on straight roads, ride in pairs in a staggered formation, with pairs two seconds apart. On bends, you should follow the normal positioning rules — open up the gap between you and the other rider in your pair.

Runs will generally follow the ‘drop-off’ system. This will be explained by the ride leader during the brief. One rider is nominated the leader and is always up front, while a second rider is the tail-ender and remains at the rear. When the leader reaches a junction, he will indicate to the following rider to stop. This rider then waits and directs the rest of the group the right way, before rejoining the pack just in front of the tail-ender. It is important the drop off rider positions themselves so that they are visible to following riders but is in a place of safety away from following traffic.

The system allows the group to stretch out without getting separated, gives riders the freedom to ride at their own pace without fear of getting lost or having to ride faster than their ability. But remember; when you are directing other bikes, do NOT leave until the tail-ender has caught up with you! 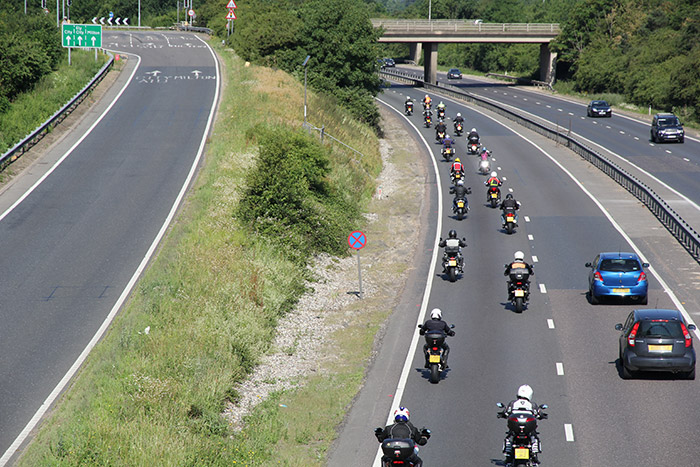